Bitcoin and its love for descending triangles 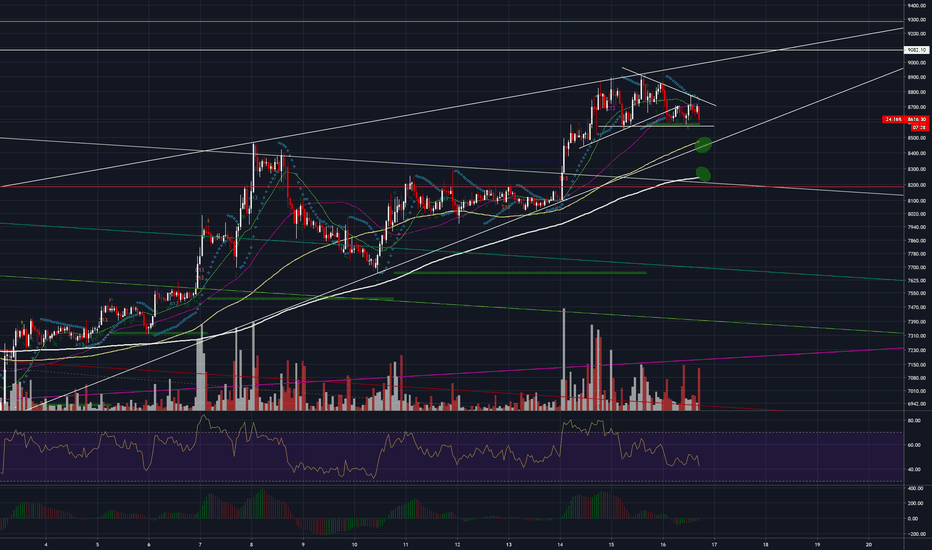 after our run up to recent targets of 8900 USD we bounced off and have been consolidating since then.
This conso looks not bullish to me in my opinion, after we tried to break resistance on the second high and
managed to do so by a few bucks, yet bounced off immediately.
This kinda looks like the consolidation after the second high after the high of 14k where we consolidated and
got rejected after breaking resistance.
A descending triangle is now forming and the 4h and 1h which indicated a drop to levels of about
8400~ and a second target at 8330~.
at 8400 waits a rather strong trendline and at 8300 recent important resistance which has not yet been retested.
Looking for possible entries in those areas, but will keep my initial entry at 8240.
I do not think it would be too profitable to go short, and if you really want, then only for a few hours/days,
since I think bitcoin looks too bullish and just wants to establish a solid trend for further upside.
Also people most likely entered around the high at 8900 and thought we would break higher.
It is rather likely for people to have their stop set at the lows of this conso and
who will get shaken our by a nice drop , for bulls (smart money) to enter again.

Check out my YouTube channel
“Enlightened Trading”
for furhter information.